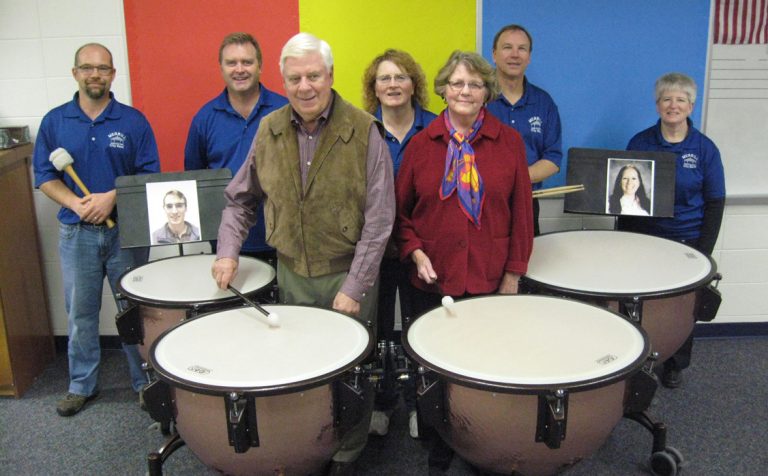 Posted at 20:02h in Uncategorized by invtech
0 Likes

The Merrill City Band is rolling out a one-and-done capital campaign to raise funds for band equipment and improvements to Normal Park, where the band performs in the summers.

The fund raising goal is just over $500,000, with about half of that for the City Band’s needs. Items on the wish list include larger wind instruments, percussion instruments and equipment, music stands and carts, music, instrument maintenance and a trailer.

After many years of nomadic concerts, the Merrill City Band found a permanent home in Normal Park in 2011 after Lydia Bauman donated the funds to construct a gazebo. Needed improvements to the park include sod and irrigation; picnic tables, benches and trash cans; lighting and walkways; trees; and bicycle racks. The band would also like to contribute toward the construction of a new building in the park that would house restrooms, a concession stand and a warming house.

Linda Becker, who has directed the Merrill City Band for nearly four decades, said she’s not aware of any similar capital campaign in the band’s 105-year history. And, once the goal is reached, they won’t do it again.

“This is a one and done,” Becker said. “The equipment will last 50 to 100 years. There will be no reason to do this again. This is the only time we’ll ever ask.”

Even with a soft launch of the capital campaign, the band is already about halfway to its goal, Becker noted. Community support has been great, she said.

“It’s really exciting right now,” she added. “Things are literally falling into my lap everywhere I go. I’m overwhelmed and very humbled by the support that we get.”

A “Diners Club” campaign is proving to be very successful, as 26 local restaurants are scheduled to hold fund raisers for the band through Dec. 12. Every week, a local restaurant will donate 10-20 percent of a day’s proceeds to the band.

An anonymous donor has pledged to match any contributions the band receives between now and Labor Day, up to $25,000. Becker is urging people to effectively double their donations while helping the band reach that maximum amount.

“This is a great time to maximize your contribution to the City Band,” Becker said.

As the City Band expends the donated funds, they are doing their business locally whenever possible, Becker added.

With the money that’s been raised so far, the band has been able to purchase a number of items they have done without for years. The band will no longer have to borrow percussion and large (expensive) wind instruments from area schools. The purchase of timpani last year, with a donation from Ron and Kay Nicklaus, has provided a big boost to the band’s sound for this concert season, Becker noted.

A new equipment trailer, that actually fits all of the band’s gear, is on order. In the meantime, the Nicklaus family has loaned the band a trailer large enough to hold everything. The trailer is essential to get the band’s equipment to Normal Park for its weekly concerts.

The band also wants to show its commitment to Normal Park by helping with further improvements. The Bauman donation of the gazebo was significant not only for the City Band but for a park that had historically been under-utilized.

“That (the building of the gazebo) has been the key factor to everything we are doing,” Becker said. “That really reignited a passion for things because we can do so much more now.”

Tax deductible donations to the City Band capital campaign can be made payable to Friends of the City Band and mailed to the Merrill Area Chamber of Commerce Foundation, Inc., 705 N. Center Ave., Merrill. All credit card types are also accepted. Donors may specify whether they wish for their contribution to go toward band equipment or park improvements.