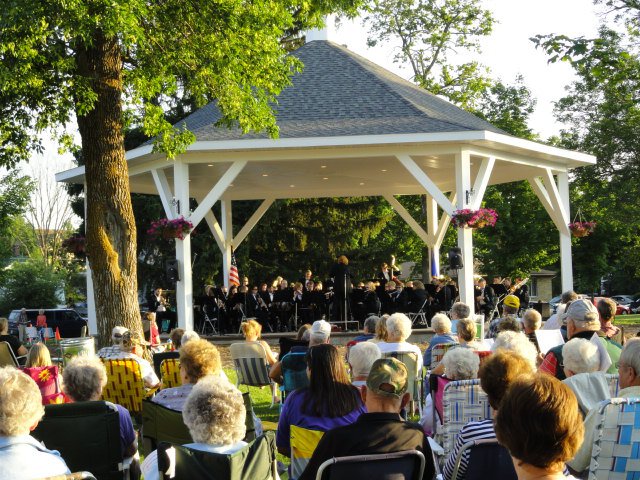 Posted at 14:38h in Uncategorized by invtech
0 Likes

On Wednesday, June 22nd, the Merrill City Band opens its concert season at the Normal Park Gazebo with an Olympic celebration. Everyone is encouraged to join the band in dressing up in anything Olympic related. Gift certificates worth at least $75 will go to the best-dressed adult, so get creative!!

Free activities run by the MHS track team for all little Olympians will begin at 5:00 pm, including a teamwork medal, coloring contest, best dressed little athlete contest, digging for silver, shot put, ring toss, hula-hoop, disc toss, and races. Be sure to visit the station where MHS art students will be ready to do some creative face painting. Photo ops abound with PRMS artist Christy Rasmussen’s athlete cutouts. Prizes for all!

Concession sales also start at 5:00. The Lions Club will serve up burgers, hot dogs, chips water, and soda. HAVEN will have tasty popcorn available and the Band Boosters will offer pie and ice cream.

The band concert gets underway at 7:00, with a program of Olympic music and other related tunes. There will be a parade of the little Olympians, followed by a special performance of “Aunt Rhodie’s Diet,” just for the kids. Prizes will be given out to the best-dressed little athletes and winners of the coloring contest. All participants will receive a coupon for a free ice cream cone at one of four Merrill ice cream shops. Gift certificates from Merrill and Gleason businesses will be given out as part of the weekly 50-50 raffle.

In the event of inclement weather, a rain date has been set for the following Wednesday, June 29th.

Bring a lawn chair or blanket and some Olympic silver to support the band and those providing concessions. See you there! USA! USA!